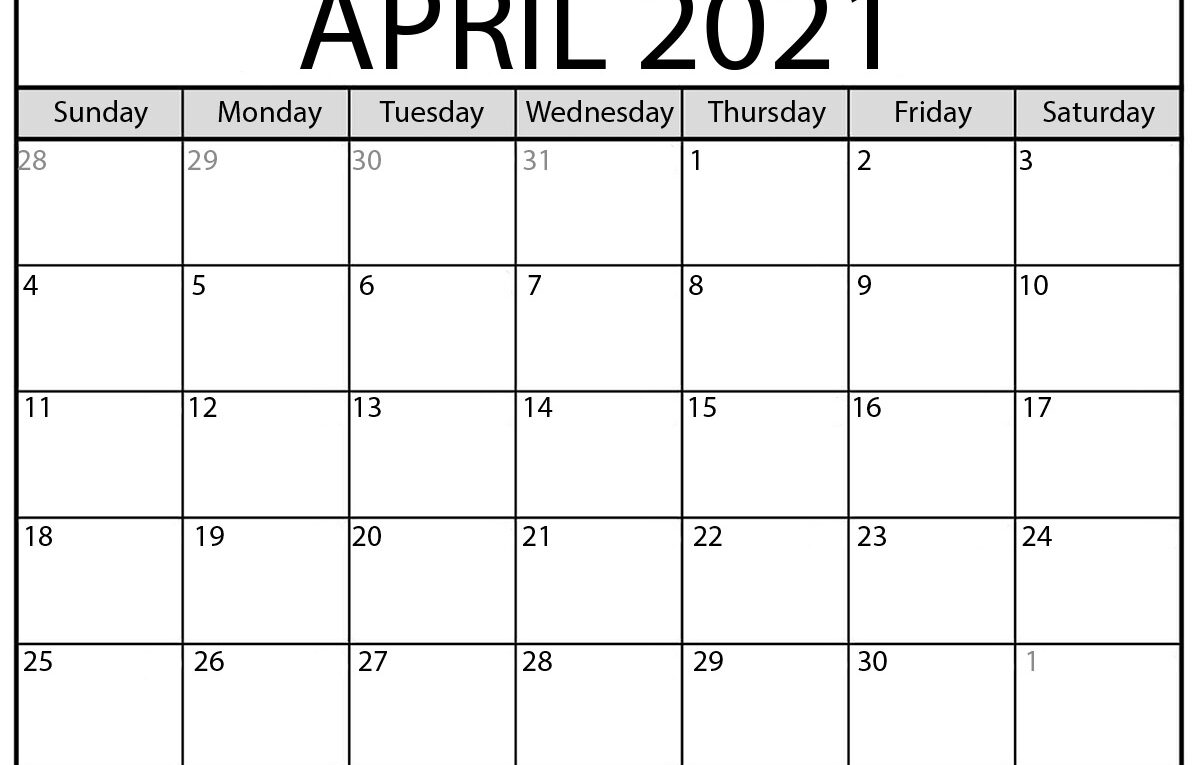 WHAT DOES APRIL MEAN TO US?

In April, small animals that were hibernating come out, the spring bird migration begins, bees and butterflies begin to gather nectar from the first flowers of the season. In some parts of the world, April is planting time but in other parts, it’s the harvest season. Because of the nice warm weather of April, amateur athletes begin to go outside and exercise in the fresh air.

People usually do huge spring cleaning in their houses, mowing their gardens and wardrobes may freshen up with the spring lightly outfits. The first day of April begins with April fool’s day. All month is celebrated in the US as a humor month. April, for all these reasons, is the time to improve well-being, to boost morale, to enjoy nature, to be thankful, to be energetic and to increase communication skills.

Take advantage of this feeling of well-being, get a blank April 2021 calendar that you can feel motivated by putting yourself achievable goals. April 2021 calendar template will help you to adjust your event, trip and invitation schedule which are usually very active in April. If you like small holiday getaways, download an April 2021 calendar with holidays where holidays are already on and plan your time as you like!

You can save your April 2021 calendar in PDF or JPG format on your computer after downloading it. Then you may easily print it through a printer attaching with your computer. If you want to take a look at the special days of the last month, you can download the March 2021 calendar, if you want to plan next month in advance you can download and print the May 2021 printable calendar.

WHAT IS THE HISTORY OF APRIL?

April is the fourth month of the year in the Gregorian calendar and the Julian calendar. It was the second month of the earliest Roman calendar before Ianuarius and Februarius were added by King Numa Pompilius about 700 BC.

It became the fourth month of the calendar year (the year when twelve months are displayed in order) during the time of the decemvirs about 450 BC when it also was given 29 days. The 30th day was added during the reform of the calendar undertaken by Julius Caesar in the mid-40s BC, which produced the Julian calendar.  April’s name is derived from the Latin word aperit, which means to open.

The traditional etymology is from the verb aperire, “to open”, in allusion to its being the season when trees and flowers begin to “open”, which is supported by comparison with the modern Greek use of άνοιξη (ánixi) (opening) for spring. Since some of the Roman months were named in honor of divinities, and as April was sacred to the goddess Venus, her Veneralia being held on the first day, it has been suggested that Aprilis was originally her month Aphrilis, from her equivalent Greek goddess name Aphrodite (Aphros), or from the Etruscan name Apru.

On between April 16 and April 26 each year, the Lyrids meteor shower appears, with the peak generally occurring on April 22. Eta Aquariids meteor shower also appears in April from about April 21 to about May 20 each year with peak activity on or around May 6.

WHAT ARE THE 10 FACTS ABOUT APRIL?

Easter is the oldest and most important festival of the Western Christian year, celebrating Jesus Christ’s resurrection (rising from the grave) following his crucifixion on Good Friday.

WHAT IS THE SIGNIFICANCE OF EASTER?

Easter is a commemoration of two important events with the first being deeply sad and dramatic while the other is just the opposite. The first one is the crucifixion and death of Jesus Christ after which his body was placed in the tomb. Three days later he resurrected from death bringing happiness and joy.

WHAT IS THE HISTORY OF EASTER?

HOW TO CELEBRATE EASTER?

Every nation has its own way of celebrating Easter. Some of its traditions are likely linked to pagan traditions and have become commercial symbols for the holiday. In the United States, Easter is marked with sunrise church services, a big celebratory dinner or lunch on Easter Sunday, the decorating of Easter eggs, Easter egg hunts, Easter Bunny, Hot Cross Buns and Easter Parades.

April Fools’ Day, sometimes called All Fools’ Day, is one of the most tolerant days of the year. Although its origin is uncertain, some see it as a celebration related to the turn of the seasons, while others believe that it comes from the difficulties in the adoption of a new calendar.

WHAT IS THE HISTORY OF APRIL FOOLS’ DAY?

According to the most reasonable explanation, many people refused or did not learn about the new calendar and continued to celebrate New Year’s Day on April 1.

Other people began to make fun of these traditionalists, sending them on “fool’s errands” or trying to trick them into believing something false. Eventually, the practice spread throughout Europe.

HOW TO CELEBRATE APRIL FOOLS’ DAY?

April Fools’ Day is observed throughout the Western world. Practices include sending someone looking for things that don’t exist, playing pranks, and trying to get people to believe made-up things and at the end shouting “April Fool’s!”

If you want to be “awake” on this day, just put a cognizable mark on the 1st of April on your blank April 2021 calendar and avoid someone made fun of you!

In conclusion, Spring, the pioneer of the summer, begins to show us its face in April thoroughly, with all the positivity, vibrant colors and fragrance. The word April comes from the Latin word “aperire”, which means to open. In so many places in the northern hemisphere, April is the month when trees and flowers begin to bloom and go on to flower (to “open”). In April, the outdoor activities and open-air events usually begin and you may need to put them in order by using a useful April 2021 calendar on OpenOffice.  Hence, you will be more planned and you will be able to get extra time to have more social activities during this beautiful month. All you need to take some action is an Printable April 2021 calendar!