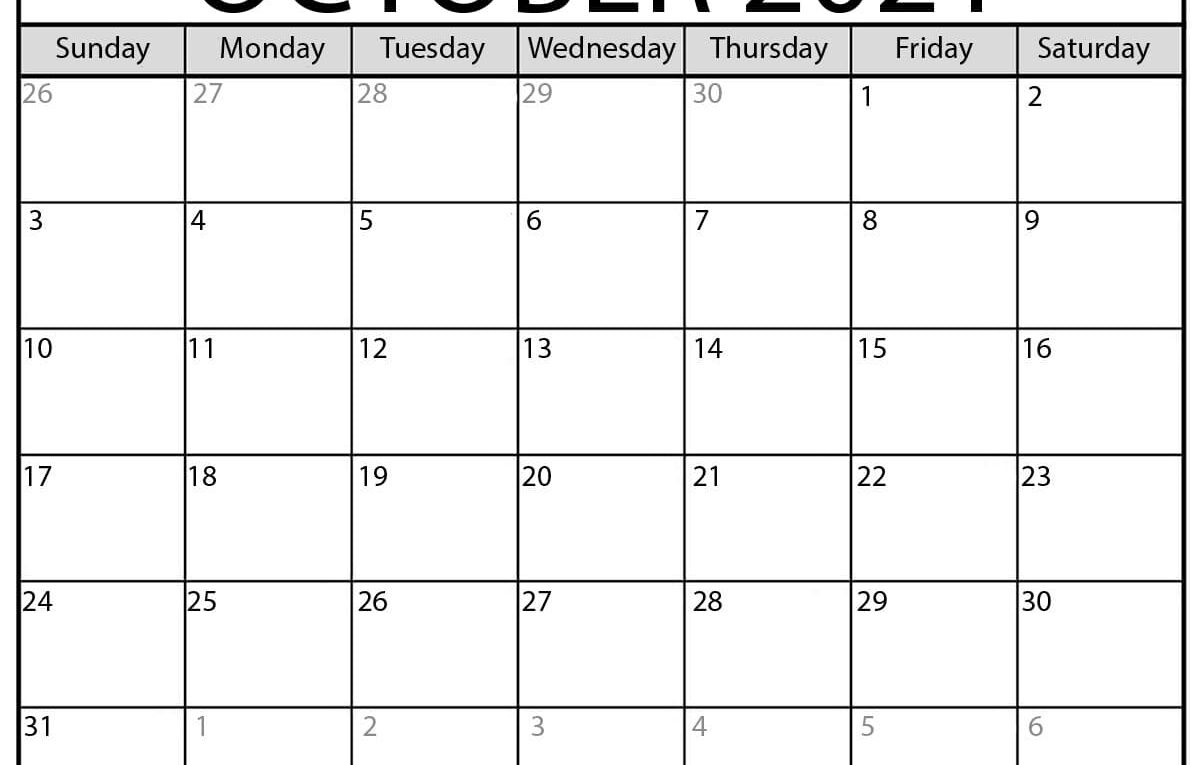 An October 2021 calendar with holidays is a perfect way to welcome the autumn and has several advantages over the regular calendars. You may use the October 2021 calendar to plan something special for this month. As you know, there are several holidays during this month which gives you a chance to say your feelings and mood out to people who are near in your heart. You can include your friends and family members in this beautiful happening by creating October 2021 Calendar template.

October is in the Northern Hemisphere often means the days are colored with falling leaves, soft weather, and growing expectation for the holiday season. Harvest Month, the 10th month of the year, shares a root with octopus and octothorpe—the Latin octo-, meaning “eight.”, because of its being 8th coming from ancient times.

WHAT DOES OCTOBER MEAN TO US?

October means Halloween for many children, thus they usually look forward to it. On the other side, beer-lovers may also be excited for the beginning of the month, which is the time of Oktoberfest in Munich, Germany. Because the popularity rose gradually for this traditional festival around the world, October brings an opportunity to visit Germany and breathe the festival air held since 1810.

Whatever your excuse to escape, try to give yourself a little vacation opportunity before the end of the year and the cold weather arrives.

WHAT IS THE HISTORY OF OCTOBER?

October is the tenth month of the year in the Julian and Gregorian Calendars. It was the eighth month in the old Roman calendar before January and February were inserted into the calendar that had originally been created by the Romans. However, they didn’t change the name of October and retained its name (from the Latin octo meaning “eight”).

In Ancient Rome, one of three Mundus patet would occur on October 5, Meditrinalia October 11, Augustalia on October 12, October Horse on October 15, and Armilustrium on October 19. These dates do not correspond to the modern Gregorian calendar. Among the Anglo-Saxons, it was known as Ƿinterfylleþ, because at this full moon (fylleþ) winter was supposed to begin. October is the second month of the autumn season in the Northern hemisphere and the second month of the spring season in the Southern hemisphere.

HOW CAN I PRINT A CALENDAR FOR OCTOBER 2021?

After downloading your October 2021 calendar, you can save it in PDF or JPG format on your computer Then you may easily print it through a printer attaching with your computer. If you want to take a look at the special days of the last month, you can download the September 2021 calendar, if you want to plan next month in advance you can download and print the November 2021 printable calendar.

WHAT ARE THE 10 FACTS ABOUT OCTOBER?

WHAT ARE THE US HOLIDAYS IN OCTOBER 2021?

Columbus Day is a federal US holiday that observed on the second Monday in October each year. CD is a special day to commemorate the arrival of Christopher Columbus in the Americas and his discovery of America on October 12, 1492.

WHAT IS THE HISTORY OF COLUMBUS DAY?

People from all around the world have celebrated Columbus’s voyage since the colonial period. The Italian-born explorer Columbus set sail in August 1492. He aimed to open a western sea route to China, India and the renowned gold and Spice Islands of Asia. But instead, he landed in the Bahamas, becoming the first European to explore the Americas since the Vikings set up colonies in Greenland and Newfoundland during the 10th century. Columbus Day became first an official state holiday in Colorado in 1906, and then it became a federal holiday in the United States by proclamation of President Franklin D. Roosevelt in 1937.

HOW TO CELEBRATE COLUMBUS DAY?

Celebrations of Columbus Day generally include lessons about Christopher Columbus and his voyage at schools. Columbus Day also has evolved into a celebration of Italian-American heritage. Today, communities organize parades and street fairs with colorful costumes, music, and Italian food. In many cities, special activities are arranged on this holiday such as traditional dance and lessons about Native American culture to honor indigenous peoples.

The United Nations’ (UN) World Teachers’ Day celebrates the role teachers play in providing quality education at all levels yearly on October 5. It is observed all over the world over since 1994 after the UNESCO Recommendation concerning Teachers.

WHAT IS THE SIGNIFICANCE OF WORLD TEACHER’S DAY?

HOW TO CELEBRATE WORLD TEACHER’S DAY?

World Teachers’ Day enables children and adults of all ages to learn to take part in and contribute to their local community and global society. In World Teachers’ Day, various events are organized in many countries around the world. These include celebrations to honor teachers in general or those who have made a special contribution to a particular community.

If you want to remember the importance of the teachers in your life once more, this is a good opportunity to raise awareness on this matter. You can put a mark on this day on your October 2021 calendar printable to remember.

Halloween, the last day of October, has a special significance for Americans especially for children, who dress in funny or ghostly costumes and knock on neighborhood doors shouting “Trick or Treat!” Pirates and princesses, ghosts and witches all hold bags open to catch the candy or other goodies that the neighbors drop in.

WHAT IS THE HISTORY OF HALLOWEEN?

November 1st is a religious holiday known as All Saints’ Day since the 800’s. The Mass that was said on this day was called Allhallowmas. The evening before became known as All Hallow e’en, or with the name we all know Halloween. Halloween, like some other American celebrations, originated from both pre-Christian and Christian customs.

HOW TO CELEBRATE HALLOWEEN?

Halloween arose as a celebration connected with evil spirits. Witches flying on broomsticks with black cats, ghosts, goblins, and skeletons have known as common symbols of Halloween.  Also, the popular trick-or-treat costumes and decorations for greeting cards are generally used in Halloween. Black is one of the traditional Halloween colors, probably because Halloween festivals and traditions took place at night. In the weeks before October 31, Americans decorate windows of houses and schools with silhouettes of witches and black cats. Of course, the pumpkins are also a popular symbol of Halloween. The pumpkin is an orange-colored squash, and orange has become the other traditional Halloween color. Carving pumpkins into jack-o’-lanterns is a Halloween custom also dating back to Ireland.

If you want to prepare for Halloween before it comes, do not forget to mark this day on your blank October 2021 calendar!

In conclusion, in October there are many opportunities to have a break and very nice views worth seeing while the weather is not yet very cold and the Autumn nature and the sea become perfect. Why don’t you go somewhere with your loved ones and think about the decisions you made at the beginning of the year and the new decisions for the coming year? A 2021 printable calendar is a great tool to do both your vacation plan and review your goals. Thanks to a blank October 2021 calendar you can give a very nice tune to yourself and your life. With just an easy-to-use October 2021 calendar template, you can start using your time more effectively. How does that sound? In addition to all these calendars, we made a customizable calendar for you. You can design your calendar using the OpenOffice application.

Hello, I am Mateo Pedersen from Norway. I'm currently going to University of Oslo. I've been working on printable calendars for a while. Now I have decided to share these beautiful works with you guys. I created some calendars that you can print monthly or yearly for you. I hope you guys like my calendars.
You can also check out my friend Betina Jessen's free calendars here.