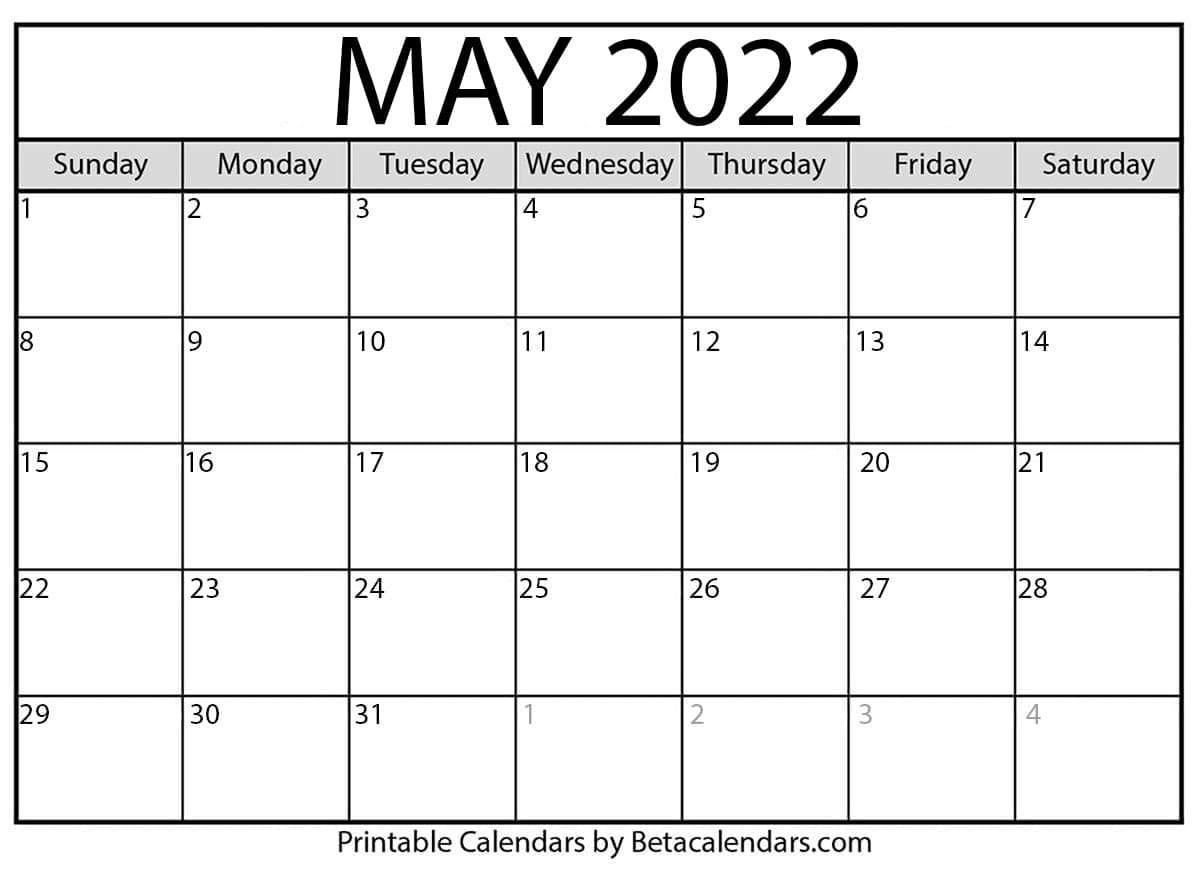 Let me introduce to you a fresh and brand new printable calendar – May 2022 calendar! This is a blank May 2022 calendar and it’s absolutely free and fully editable. You can use it for your home, kids, office, or school.

WHAT DOES MAY MEAN TO US?

In May, warm and smooth weather spurs people on to participate in nature activities, concerts, and open-air events.  May is also the time that moms around the world get showered with love for Mother’s Day. But, without question, the most popular holiday in May in the U.S. is Memorial Day, the national holiday that is also known as the unofficial start to summer.

WHAT IS THE HISTORY OF MAY?

The month of May (in Latin, Maius) was named for the Greek Goddess Maia, who was identified with the Roman era goddess of fertility, Bona Dea, whose festival was held in May.

Conversely, the Roman poet Ovid presents a second etymology that the month of May is named for the maiores, Latin for “elders” and that the following month (June) is named for the iuniores, or “young people”. Mayovka, in the context of the late Russian Empire, was a picnic in the countryside or a park in the early days of May, hence the name. Eventually, “mayovka” (specifically, “proletarian mayovka”) came to mean an illegal celebration of May 1 by revolutionary public, typically presented as an innocent picnic.

Moreover, special devotions to the Virgin Mary occur in May.  As the important astronomical events, Eta Aquariids meteor shower appears in May. It is visible from about April 21 to about May 20 each year with peak activity on or around May 6. The Arietids shower from May 22 – July 2, and peaks on June 7. The Virginids also shower at various dates in May.

If you download a May 2022 calendar, you will be able to use it in many different ways such as scheduling your month, to mark your important days and to put some goals to the upcoming days.

By using a blank May 2022 calendar, you definitely will feel more comfortable as you may see your near future clearer! If you want to take a look at the special days of the last month, you can download the April 2022 calendar, if you want to plan next month in advance you can download and print the June 2022 printable calendar. After you downloaded your May 2022 calendar template, you will see that the empty and ready-to-fill month is waiting for you. You can save your May 2022 calendar in PDF or JPG format on your computer or you may easily print it through a printer attaching with your computer, as well.

WHAT ARE THE 10 FACTS ABOUT MAY?

MOTHER’S DAY (THE SECOND SUNDAY OF MAY)

Mother’s Day is a holiday celebrated on the second Sunday of May each year. It is a day that commemorates motherhood and appreciates all mothers and mother-figures including grandmothers, great-grandmothers, stepmothers as well as their contribution to society.

WHAT IS THE HISTORY OF MOTHER’S DAY?


Mother’s Day was first celebrated in 1908 in Grafton, West Virginia when Anna Jarvis held a memorial for her mother Ann Reeves Jarvis. Anna Jarvis began a campaign to make Mother’s Day a national holiday and she succeeded in 1914 when the U.S. President Woodrow Wilson proclaimed the second Sunday in May a Mother’s Day.

HOW TO CELEBRATE MOTHER’S DAY?

It is a wonderful day to remember our mothers who have an important place in our lives and to offer our gratitude and love to them. If you want to do something special to this day, do not forget to put a mark on your May 2022 calendar printable this day!

MEMORIAL DAY (THE LAST MONDAY OF MAY)

WHAT IS THE HISTORY OF MEMORIAL DAY?

Memorial Day was first widely observed on May 30, 1868, to commemorate the sacrifices of Civil War soldiers, by proclamation of Gen. John A. Logan of the Grand Army of the Republic, an organization of former Union sailors and soldiers. During that first national commemoration, former Union Gen. and sitting Ohio Congressman James Garfield made a speech at Arlington National Cemetery, after which 5,000 participants helped to decorate the graves of the more than 20,000 Union and Confederate soldiers who were buried there.

This event was inspired by the local observations of the day that occurred in many American towns within three years of the Civil War. In 1873, New York was the first state to appoint Memorial Day as a public holiday. In 1971, once the congress passed the Uniform Monday Holiday Act, then established that Memorial Day was to be commemorated on the last Monday of May.

WHAT IS THE SIGNIFICANCE OF MEMORIAL DAY?

Memorial Day is a day for remembrance of those who have died in service to their country, the United States of America. Memorial Day was originally called Decoration Day before, as the holiday was concentrated on decorating the graves of those who had fallen in the Civil War. Today Memorial Day is celebrated across the United States. It is widely accepted as an important holiday that remembers those that died for the country and serves to remind people of the real meaning of war.

HOW TO OBSERVE MEMORIAL DAY?

There are many formal ceremonies is held on Memorial Day. Most of these are organized in local communities which are announced by local Veterans of Foreign Wars office or local city government agency. Although many cities have a claim to have already observed Memorial Day, President Lyndon Johnson officially declared Waterloo N.Y. as the birthplace of Memorial Day in May 1966.

As the old idiom says “April showers bring May flowers”, in May do not stick on the mood which makes you think you are late for achieving your goals. You are in a mood of spring and spring is tricking you to break the diets and slow down the exercises.

It usually happens. We may have difficulty in keeping on track, but we should continue to be planned and aware that, a period of discomfort can provide the basis for a period of happiness and joy, as the meaning of the idiom above says. Keep on using the printable calendar, download a new May 2022 calendar template and plan your days as you wish. Remember, this is the month that open-air activities, festivals, weddings and trips begin and you need to schedule everything well to catch all of them with ease. It is not late, just download a May 2022 calendar with holidays and enjoy your May!