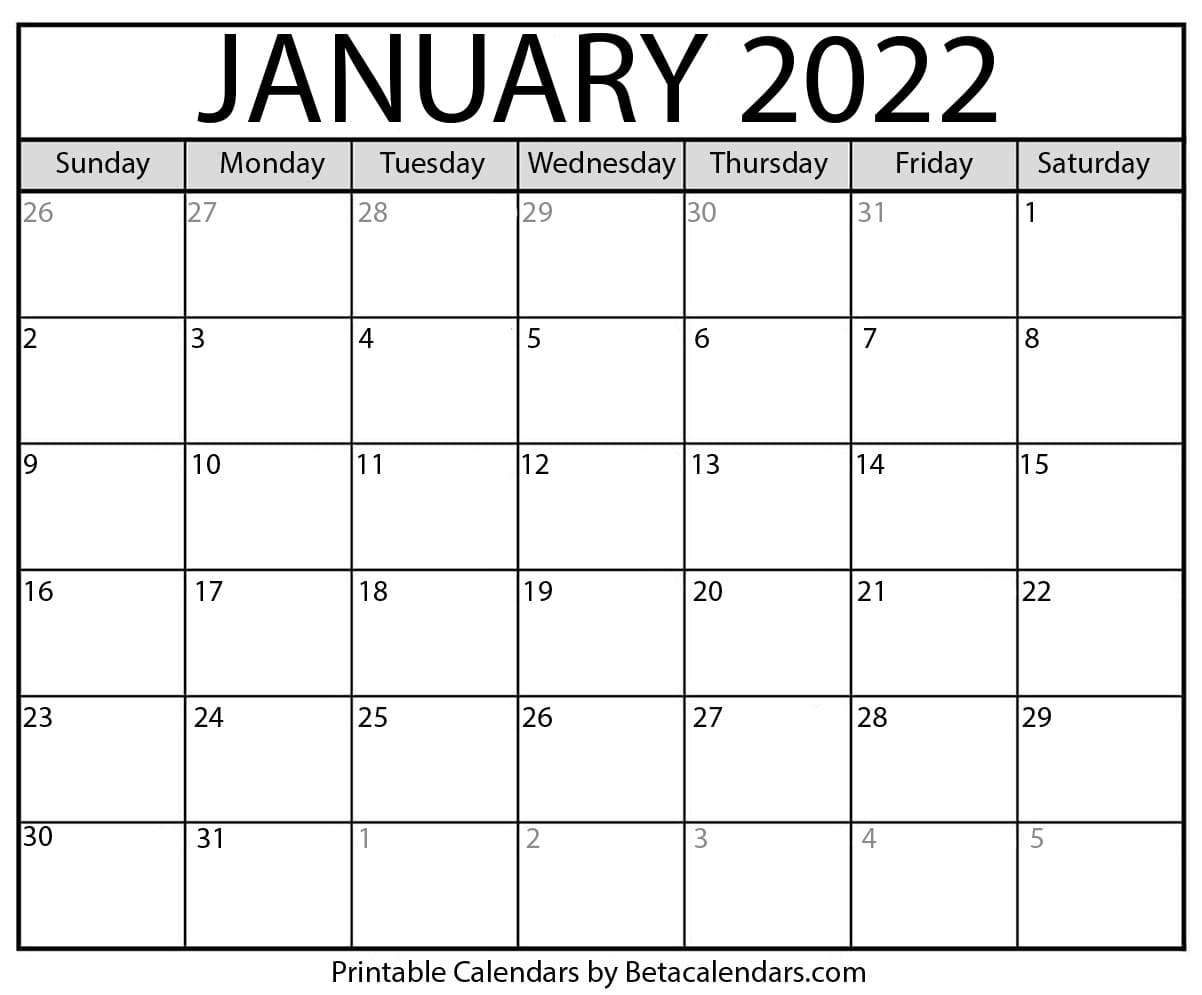 Have you been searching for a free, blank, printable January 2022 Calendar? January lasts 31 days and it is considered to be the coldest month of the Northern Hemisphere. The first day of January, January 1st, is an international holiday celebrated in all countries in the world.

January 2022 calendar will be a great help because there are many things that we need to plan ahead before using January 2022 printable templates. You know, you need to create your own timetable for having a successful year, and without such events as meetings or parties, you will have no one who prepares for a big event in the future, if you only have an empty timetable. The large blank spaces of your January 2022 calendar invites you to write everything in them.

January is widely accepted one of the most loved months because it brings the fresh beginning of a brand-new year. It is also a common public holiday for all schools, government offices and official businesses.

The new year begins with January. Therefore, all meanings attributed to the new year include January, even directly to January. It is the month in which new decisions were taken including fresh beginnings or hard giving ups. Because we basically aim to start or end something. Like starting sports or quitting smoking. Particularly during the holiday period, the foods, gained weights, the drinks, and all the harmful habits push us to think more about our health. Sometimes, we focus on being a completely different person in the new year. From January 2022, it is time for us to feel forgiven and to advance, not to feel guilty.

WHAT IS THE HISTORY OF JANUARY?

January is the first month of the year in the both Gregorian and Julian calendars. It is named after Janus, the Roman god of doors, in the western languages. The months of January and February did not take a place in earlier versions of the Roman calendar, which divided the year into 10 months and left 61 days unaccounted for in the winter. They both were added together around 700 BCE to the calendar. Because of it, January and February were initially the last months of the calendar year, which began in March (Martius). However, in 450 BCE, the beginning of the year was moved to January 1.

January originally consisted of 30 days when it was firstly added to the 10-month Roman calendar. However, Julius Caesar added a day to January and made it 31 days long in 46 BCE.

Having a printable calendar makes us feel more targeted and planned. So, our first goal for the new year may be to have a January 2022 calendar first. You can place the decisions you make, the important days ahead, the celebrations, the meetings, everything in your blank printable January 2022 calendar. After that, it is enough to control your calendar with a comfortable mind. Don’t limit yourself to a single month! If you want to take a look at the special days of the last month, you can download the December 2021 calendar, if you want to plan next month in advance you can download and print the February 2022 printable calendar.

If you download your January 2022 calendar template, you will see that the empty and ready-to-fill month is waiting for you. You can save your printable calendar in PDF or JPG format on your computer while downloading. Then you may easily print it through a printer attaching with your computer. You may easily manage your schedule and upcoming plans by using blank January 2022 calendar to become more targeted. You can also follow January 2022 events and add them to your calendar in advance to stay motivated! January is a fresh start and you certainly need a calendar to arrange your days in January to feel yourself readier to accomplish anything you aimed!

WHAT ARE THE 10 FACTS ABOUT JANUARY?

WHAT ARE THE US HOLIDAYS IN JANUARY 2022?

New Year’s Day is a national and global holiday celebrated on January 1st, the first day of the New Year.

WHAT IS THE HISTORY OF NEW YEAR’S DAY?

New Year’s is one of the oldest holidays still celebrated, but the nature of the celebrations has changed over time. It originated thousands of years ago in ancient Babylon, celebrated as an eleven-day festival on the first day of spring. During this time, many cultures used the cycle of the Sun and the Moon to decide the “first” day of the year. However then, Julius Caesar implemented the Julian calendar that January 1st became the common day for the celebration.

WHY IS NEW YEAR’S DAY IMPORTANT?

Many people celebrate New Year’s Day with the loved ones, involving traditions, particular customs and gifts meant to bring luck, health and success in the upcoming year. Typically, the customs and traditions of happy New Year’s Day involve celebrating with a variety of different foods and drinks.

HOW TO CELEBRATE THE NEW YEAR’S DAY?

The content of the celebrations has varied as well. While early ones were more paganistic in nature, celebrating Earth’s cycles, Christian tradition celebrates the Feast of the Circumcision of Christ on New Year’s Day. However, in the twentieth century, the holiday created own celebration and mostly separated from the common association with religion.

Today, New Year’s Day has become a holiday associated with nationality, relationships and consumption rather than a religious celebration, although many people do still follow older traditions.

He graduated from the sociology of Morehouse College of Arts in 1948.In 1955,he received his PhD in philosophy from Boston University. In 1954, Martin Luther King became the pastor of the Dexter Baptist Church in Montgomery, Alabama.He ended his action when the US government stopped discrimination on buses.In 1955, he led the Montgomery bus boycotts, which were initiated to rebel against racism in the Alabama state’s public transport system. King held the first protests in Montgomery, Alabama, and was known for his peaceful actions in Atlanta, Georgia. King then made his famous “I have a dream” speech in front of the Lincoln Memorial in Washington in August 1963. Martin Luther King’s protests against peace have led to the adoption of the 1964 Civil Rights Act. The law prohibits racial discrimination in the United States. For his work for human rights and equality, King was awarded the 1964 Nobel Peace Prize.

On April 4, 1968, he was assassinated in Memphis, Tennessee.

WHAT IS THE HISTORY OF MARTIN LUTHER KING JR. DAY?

Martin Luther King Jr. was also an advocate of non-violent protest and became the youngest man to be awarded the Nobel Peace Prize. After he was assassinated in 1968, a campaign was started for his birthday to become a holiday to honor him. It is seen as a day to promote equal rights for all Americans, regardless of their own backgrounds. In recent years, federal legislation has encouraged Americans to give some of their time on this day as volunteers in citizen action groups.

Martin Luther King Jr. Day is a public holiday. It is a day off for the general population, and schools and most businesses are closed.

Martin Luther King Day is a relatively new federal holiday and there are few long standing traditions. Its traditions are rooted in the idea of promoting equal rights for all Americans, regardless of their background.

Some schools celebrate the day by teaching their pupils or students about the work of Martin Luther King and the struggle against racial segregation and racism. In recent years it is encouraged that Americans to give some of their time on this day as volunteers in citizen action groups.

Cities all over the country is celebrated Martin Luther King Day by holding massive parades, receptions, and days of service in his honor.

He is most well-known for his campaigns to end racial segregation on public transport and for racial equality in the United States.  Famous “I Have A Dream” speech of Martin Luther King Jr. was encouraged everyone to be with him to fight for the equality.

This important day of commemoration is in the 20th of January in this year 2022. If you want to be a part of the observations, do not forget to put a special mark on this day on your January 2022 calendar.

In conclusion, January is the perfect time for change. It is time to look forward to the future with hope, refreshed after Christmas. And almost everyone tries to make changes, so you’re not alone. The fact that your decisions are not implemented consistently is not so important, because January is the trial month. We tend to adapt slowly; we tend to appreciate ourselves. The most hopeful and optimistic time of the year is January. If you are in need of planning January and the whole year in advance, it is very useful to use a January 2022 calendar. After you download easily a January 2022 calendar printable, you may mark all the holidays on it and waiting for them will be a motivating factor while you are dealing with the responsibilities after a long holiday.