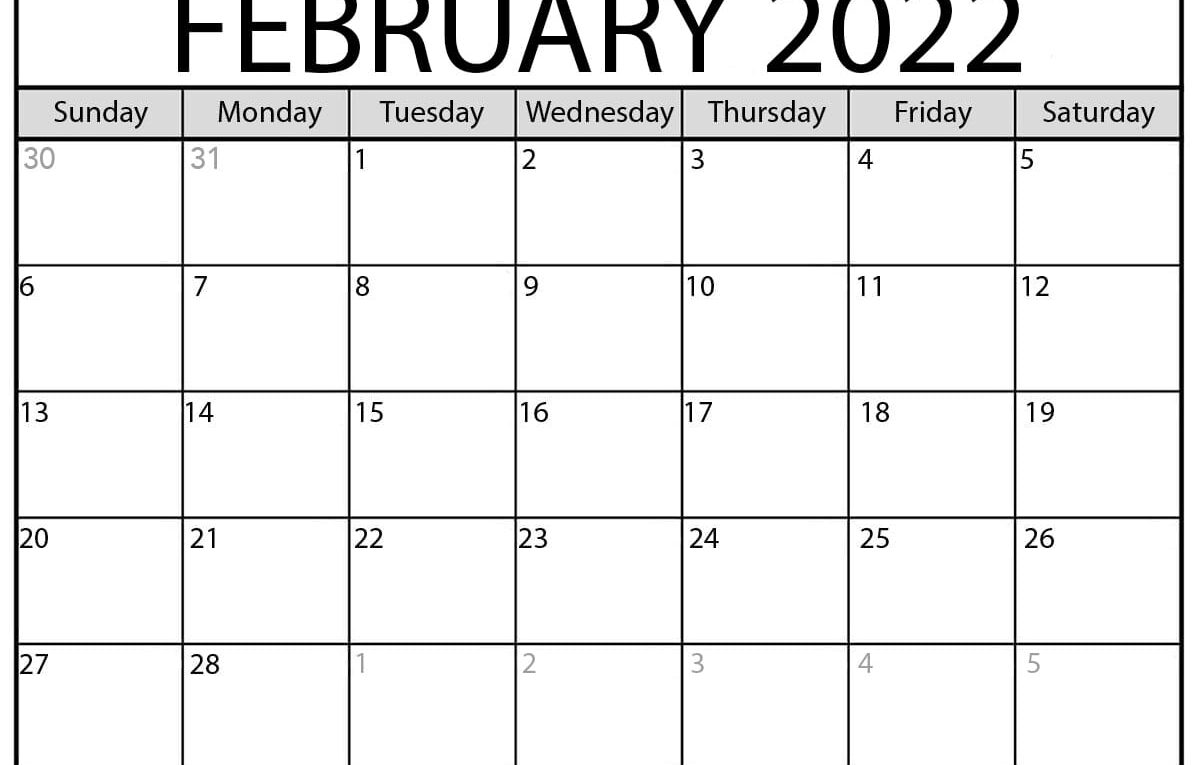 Free Printable February 2022 calendar is vital if you need to check, schedule and print those tricky dates, such as birthdays of your children or colleagues. You also can integrate the calendars available online in it. From this webpage, you can download a monthly calendar with weekends highlighted on the month pages. You can fill the extra pages that come in blank calendars with important notes and dates like birthdays or doctor appointments.

WHAT DOES FEBRUARY MEAN TO US?

The word February comes from the Latin word Februarius, from Latin februare meaning to “purify” or “expiate.” In ancient Rome, Februarius was the “Month of Purification” and great celebrations were being organized to welcome February.

We can say that this “purification” means the same today in different aspects. The rush of the holidays was already left behind in February and we finally see the pieces of sun and begin to open our windows slowly. Because February is the time for the first breaths of fresh air. And, by this time of year, the pressure of New Year’s resolutions is gone and the flow of life begins to become smoother. We begin to see the effects of our healthy new year decisions and celebrate ourselves for achieving our goals in February. It seems much easier to proceed this way.

WHAT IS THE HISTORY OF FEBRUARY?

January and February were added to the Roman calendar by Numa Pompilius about 713 BC. February remained the last month of the calendar year until the time of the decemvirs (c. 450 BC) when it became the second month.

At the time passes, February was shortened to 23 or 24 days, and a 27-day intercalary month, Intercalaris, was inserted immediately after February to change the year with the seasons. Under the reforms that instituted the Julian calendar, Intercalaris was removed, leap years occurred regularly every fourth year, and in leap years February became 29 days. Thereafter, it remained the second month of the calendar year, meaning the order that months are displayed (January, February, March, …, December) within a year-at-a-glance calendar. The Gregorian calendar reforms made slight changes to the system for determining which years were leap years and thus contained a 29-day February. The purification ritual Februa held on February 15 (full moon) in the old lunar Roman calendar.

HOW CAN I PRINT A CALENDAR FOR FEBRUARY 2022?

WHAT ARE THE 10 FACTS ABOUT FEBRUARY?

WHAT ARE THE US HOLIDAYS IN FEBRUARY 2022?

PRESIDENTS’ DAY IN THE UNITED STATES (THIRD MONDAY OF FEBRUARY)

President’s Day, formally Washington’s Birthday, is a federal holiday observed in the United States on the third Monday of February annually. It is a day that celebrates all U.S. presidents (past and present) specifically George Washington (born on February 22), the first President of the United States.

WHAT IS THE HISTORY OF PRESIDENTS’ DAY?

The history of President’s Day dates back to the year 1800, following the death of President George Washington in 1799. His birthday on February 22 became a significant day of remembrance. Washington is always recognized as the most important figure in American history.

Initially, President’s Day was called Washington’s Birthday. The shift from Washington’s Birthday to Presidents’ Day began in the late 1960s when Congress proposed a measure known as the Uniform Monday Holiday Act. This law sought to shift the celebration of several federal holidays from specific dates to a series of predetermined Mondays.

HOW TO CELEBRATE PRESIDENTS’ DAY?

Traditionally President’s Day is viewed as a time of patriotic celebration and remembrance. Many patriotic and historical groups stage celebrations, re-enactments and other events to highlight this holiday. Schools in several states are required to spend the days (leading up to Presidents’ Day) teaching students about the accomplishments of United States’ presidents, specifically focusing on the lives of Washington and Lincoln.

Presidents’ Day 2022 is on Monday, February 21th. If you want to attend the observations, do not forget to put a special mark on this day on your February 2022 calendar with holidays.

WHAT IS THE HISTORY OF VALENTINE’S DAY?

Historically, Valentine’s Day is believed to be originated in Europe and said that it is brought to North America in the 19th century by British settlers. It is firstly celebrated as a Western Christian liturgical feast day honoring saints named Valentinus.

There are several stories were told associated with the various Valentines that were connected to February 14. The most famous one of them says that Saint Valentine was imprisoned for performing weddings for soldiers who were forbidden to marry and for ministering to Christians, who were agonized under the Roman Empire. According to legend, during his imprisonment, Saint Valentine healed the daughter of his jailer, Asterius, and before his execution, he wrote her a letter signed “Your Valentine” as a last farewell.

HOW TO CELEBRATE VALENTINE’S DAY?

Many people around the world celebrate Valentine’s Day by showing their love and appreciation for their loved ones. This is a great time and chance to prove your true deep love to your partner. Some people prefer a romantic dinner in a nice restaurant, while others may choose to propose or get married on this day. On Valentine’s Day, it is traditional for valentines to give each other roses, greeting cards, chocolates, jewelry or flowers. Some may consider Valentine’s Day as an opportunity to plan a romantic vacation to have a few days getaway.

If you have a partner, it is not a good option to forget this day, isn’t it? So, do not take any risk and mark this day on your February 2022 calendar in advance and just wait silently!

Groundhog Day is a holiday celebrated on February 2 in the United States and Canada. According to the tradition, if it is cloudy when the famous groundhog Punxsutawney Phil emerges from its burrow on this day then spring will come early. If it is sunny, the groundhog will supposedly see its shadow and retreat into its burrow, and the winter weather will continue for six more weeks.

WHAT IS THE HISTORY OF GROUNDHOG DAY?

The first observation of Groundhog Day occurred in 1886 in Punxsutawney. Over the years, several other locations have begun using their groundhog, including General Beauregard Lee of Atlanta, Dunkirk Dave of Dunkirk, New York, and Jimmy of Sun Prairie, Wisconsin.

In 2018, Phil the Groundhog, saw his shadow, suggesting six more weeks of winter. However, the average temperature across the contiguous U.S. in February was above average, and March recorded slightly above-average temperatures, meaning the U.S. saw an early spring. Based on data from 1887 to 2018, Punxsutawney Phil is more likely to see his shadow. Phil has seen his shadow 104 times, with no shadow 18 times.

If you want to learn the weather prediction of Phil, just put a mark on February 2nd on your February 2022 calendar and watch the news on that day!

In conclusion, February is known as the Purification Month since the ancient Roman era but is also a transition period. So, the meaning and symbolism of February will also have a sense of transition. There is a change in the weather at this time of year and we can see this change at some festivals and holidays this month. Even though the effect of the winter season continues, we start to blink in the spring.

All these reasons create opportunities for us to be more planned and active. We may have a February 2022 printable calendar to keep our diary, note important events, or record events to which we will participate. Therefore, just as we suggested for January 2022, it is a great idea to have a useful February 2022 calendar to enjoy this beautiful month as well as possible. Don’t try to keep everything in mind, download your February 2022 calendar and relax! Are you a good designer? Would you like to personalize and print the calendar using Apache’s OpenOffice program? Here, start with the February 2021 calendar right now!

Hello, I am Mateo Pedersen from Norway. I'm currently going to University of Oslo. I've been working on printable calendars for a while. Now I have decided to share these beautiful works with you guys. I created some calendars that you can print monthly or yearly for you. I hope you guys like my calendars.
You can also check out my friend Betina Jessen's free calendars here.