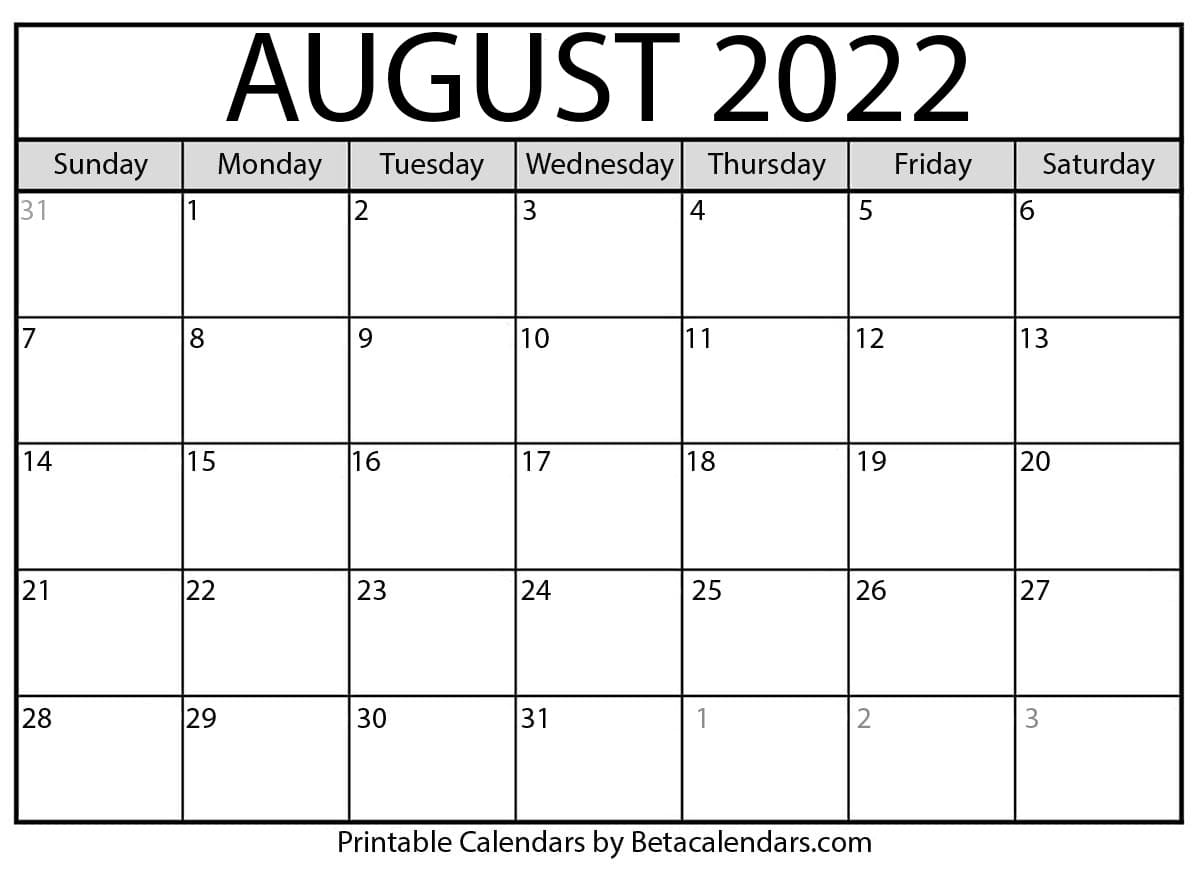 August 2022 Calendar template  is a side by side view, parallel with a count of the number of days in the next month. It is possible to print it daily, weekly and monthly. This calendar format is best used in work places, home, and offices. You can easily print this calendar on the back of your office and home desk planners to make sure you don’t miss your appointments for August 2022 Calendar.

August is the month when summer begins to be getting closer to autumn, although it is still too hot for living in the cities middle of the buildings! It is much better to be near the seas and under the trees in August. August is considered the busiest time for tourism due to the school summer vacation period. It is also a good month to gain holiday motivation before entering autumn (and of course winter) as it is the last month of summer. It is the seasonal equivalent of February in the southern hemisphere.

WHAT DOES AUGUST MEAN TO US?

Watermelon, ripe melon, sweet corn on the cob, and blueberries are just a few of the gifts of August. August is also the canning season at the same time, which is the time to prepare and put on the fridge the fresh summer vegetables for consuming them in winter. It is the very common vacation season that people want to take a long break before summer ends and September comes. September is usually defined as a month of the increasing the workload density continues until the end of the year. Therefore, it is a good time to freshen and become ready to work harder by pausing the responsibilities for a while.

It is very important to plan the month of August before arriving. What else will be done in that month? Are there celebrations, birthdays, weddings, special invitations? Will there be meetings, seminars, business events? Get an August 2022 calendar with holidays in your hand and fill in the days of August and see the free days first. Then do your holiday research according to your vacancies, or even complete your reservations, at least pre-bookings if possible. Now it’s time to put a huge “vacation” mark on your August 2022 calendar template! You see, just doing it has increased your motivation, right?

A printable calendar is more than a piece of paper. It makes you target-oriented, orderly and purposeful. You can save your August 2022 calendar in PDF or JPG format on your computer after downloading it. Then you may easily print it through a printer attaching with your computer. If you want to take a look at the special days of the last month, you can download the July 2022 calendar, if you want to plan next month in advance you can download and print the September 2022 printable calendar.

WHAT IS THE HISTORY OF AUGUST?

In 153 BC January 1 was determined as the beginning of the year. August is named for Augustus Caesar who became Roman consul this month. The month has 31 days because Julius Caesar added two days when he created the Julian calendar in 45 BC.

WHAT ARE THE 10 FACTS ABOUT AUGUST?

WHAT ARE THE US HOLIDAYS IN AUGUST 2022?

Women’s Equality Day celebrates on 26 August each year the anniversary of the adoption of the 19th Amendment to the United States’ Constitution on August 26, 1920

WHAT IS THE HISTORY OF WOMEN’S EQUALITY DAY?

The amendment, which was and still remains a major landmark in the women’s rights movement in the United States, was first introduced in the Congress in 1878 by California Senator Aaron A. Sargent on the behest of suffragists Elizabeth Cady Stanton and Susan B. Anthony. Because of this, the first version of the amendment is often called the Anthony Amendment, after Susan B. Anthony, who was arrested for voting in the Presidential elections in 1872.

Women’s Equality Day was first celebrated in 1971 after Congress passed a resolution to mark the occasion annually.

WHAT IS THE SIGNIFICANCE OF WOMEN’S EQUALITY DAY?

The purpose behind the creation of this holiday was to raise awareness about the importance of gender equality in society and to recognize the hard work and sacrifices made by the pioneers in the suffrage movement.

HOW TO CELEBRATE WOMEN’S EQUALITY DAY?

In the Women’s Equality Day, women’s rights organizations working in the area of voting rights celebrate this day by holding seminars and workshops that point issues and solutions currently faced by women in the country.

As it is one of the revolutionary days to remember and celebrate, put a special mark on your August 2022 calendar to be informed of the events and celebrations.

National Presidential Joke Day is observed annually on August 11. It is full of a fun day to recognize the humor often found in the highest office in the land and offers a nod to the gaffes, social missteps and sometimes downright hilarious mistakes presidents make.

WHAT IS THE HISTORY OF PRESIDENTIAL JOKE DAY?

The story of the beginning National Presidential Joke Day was about a radio broadcast on August 11, 1984. During a soundcheck for his Saturday evening on a radio broadcast, President Ronald Reagan joked, “My fellow Americans, I’m pleased to tell you today that I’ve signed legislation that will outlaw Russia forever.  We begin bombing in five minutes.” The networks had agreed comments made during sound checks were off the record.  However, this joke sound record was leaked to the general public and CBS eventually broadcast the recording.

This was during the time of the Cold War, and not everyone thought the joke was funny. It was even reported that the Soviet Union went on alert after hearing Reagan’s words. Nonetheless, the phrase is now told as a comedic gaffe, and the date it occurred on is now celebrated as Presidential Joke Day.

HOW TO OBSERVE PRESIDENTIAL JOKE DAY?

On the National Presidential Joke Day, people share their favorite presidential missteps and jokes through their social media accounts by using the countrywide special hashtags.

WHAT IS THE SIGNIFICANCE OF INTERNATIONAL LEFTHANDERS DAY?

HOW TO OBSERVE INTERNATIONAL LEFTHANDERS DAY?

To contribute to the awareness of lefties, they may take right-handed friends with them to show them how difficult it can be to use objects not made for them.

There is also a term called “ambidextrous” referring to the people who can easily perform tasks and use devices with both their hands. Ambidexterity is rare and only occurs in about 1% of the population.

You may be right-handed or left-handed, none of them is a defect or a privilege. If you see this day as an opportunity to increase awareness of both parties, make room for this day in your August 2022 calendar printable.

WHAT DAY OF THE WEEK DO INTERNATIONAL LEFTHANDERS DAY FALL ON BETWEEN 2015-2025?

In conclusion, August is one of the very busy months, which is not well understood how quickly it passes. Whether you’re attending special events, visiting family and friends, or going on a trip, you’ll need to make good planning to get the most out of August. Having an printable August 2022 calendar will make you more satisfied than you think, just try it. Because we all complain that we can’t catch up on things we need to do.