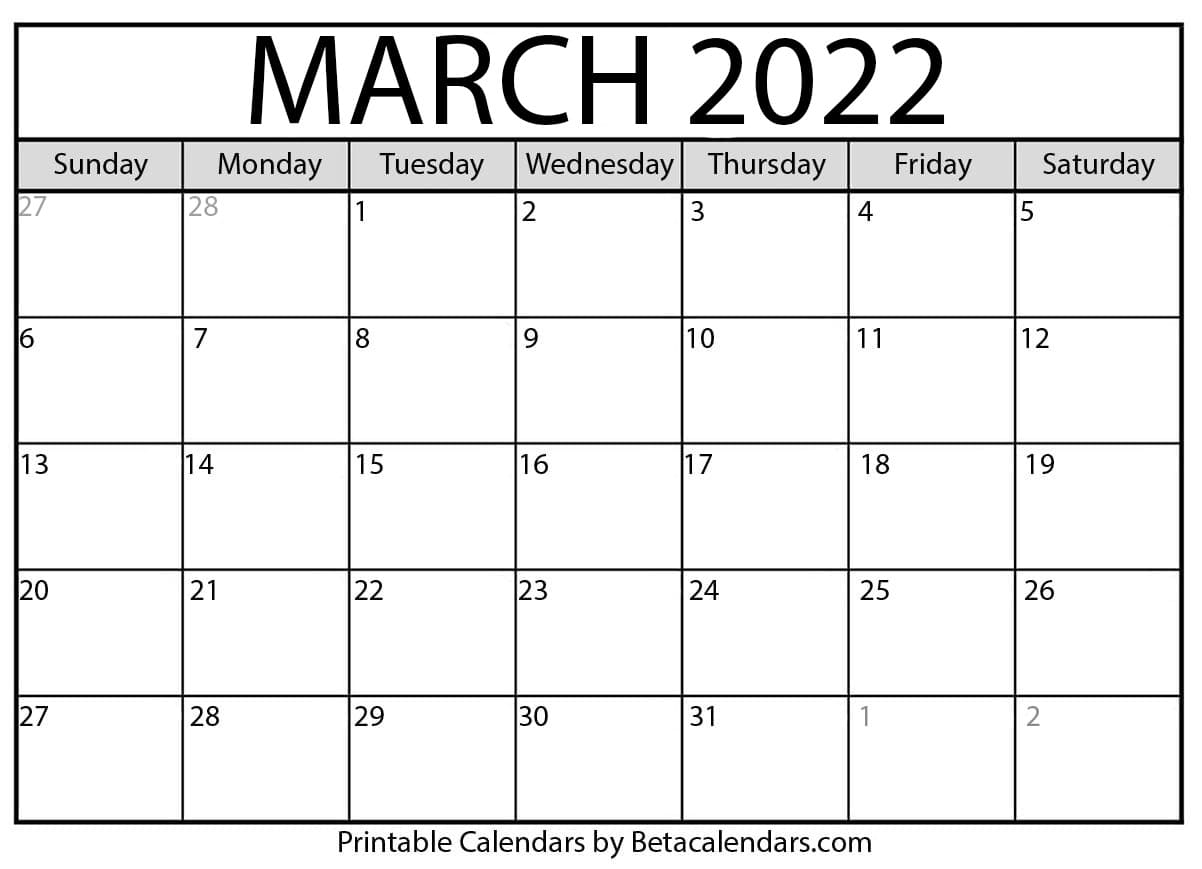 Did you know that Free Printable March 2022 Calendar are one of the most searched for things on the web? And this is not surprising, because most people need a calendar for their everyday activities. A free printable calendar is exactly what you need, it is easy to use and print. So if you are one of those looking for a free calendar which can be used to organize your schedule, these calendars will come in handy.

WHAT DOES MARCH MEAN TO US?

March is the first month of spring. Although the air temperatures have risen, the first two weeks of March are like Winter and the last 2 weeks as Spring. In fact, the official beginning of spring is March equinox. So, March is an unstable month in terms of climate. In this month, you can wear both boots and slippers, and t-shirts and coats, you can wear gloves, you can be an umbrella addict, you can even sunbathe and play with snow.

While the weather is uneven, this is often reflected in our mood. Hot and sunny months are about to come, but on the other hand, the year passes rapidly. We didn’t understand January and February was already short, but after 31 days in March, the New Year is no longer “new” to us. For this reason, it is natural to be a little worried and low motivated. But we should immediately revise our plans without being affected by this, and we must mobilize ourselves with similar energy at the beginning of the year.

WHAT IS THE HISTORY OF MARCH?

March was the first month of the year in older versions of the Roman calendar because of its association with the first day of spring. January and February were the months of winter and winter was accepted as a monthless period at those times.

The March equinox occurs during this month on the 21st day. After January became the first month of the calendar year around 700 BCE, January 1st is accepted as New Year’s Day instead of March. However, many cultures and religions still celebrate the beginning of the new year in March.

“March”, the English name of the third month of the year, comes from “Mars”, the name of the Roman god of war (the Latin name of the month was Martius, meaning “of Mars”). In other languages, March presents different meanings.

In March, especially in the last weeks of March, the outdoor activities begin you may start to have invitations for a weekend or long-weekend activities and vacations. If you want to manage your schedule you may download a March 2022 calendar, you may organize your attendance and ready to join more events beforehand. After downloading your March 2022 calendar, you can save it in PDF or JPG format on your computer or you can easily print it through a printer attaching with your computer. If you want to take a look at the special days of the last month, you can download the February 2022 calendar, if you want to plan next month in advance you can download and print the April 2022 calendar.

WHAT ARE THE 10 FACTS ABOUT MARCH?

WHAT IS THE HISTORY OF ST. PATRICK’S DAY?

St. Patrick was born in Roman Britain in the late 4th century, he was kidnapped at the age of 16 and taken to Ireland as a slave. Then he escaped but returned about 432 to convert the Irish to Christianity. By the time of his death on March 17, 461, he had already established many monasteries, churches, and schools to be in service of Christianity. There are many legends told about him that one of them is his droving the snakes out of Ireland and using the shamrock (main symbol of St. Patrick’s Day) to explain the Trinity.

HOW TO CELEBRATE ST. PATRICK’S DAY?

It was emigrants, particularly to the United States, who transformed St. Patrick’s Day into a largely secular holiday of celebration of things Irish. Cities with large numbers of Irish staged the most extensive celebrations, which included elaborate parades. Boston held its first St. Patrick’s Day parade in 1737, followed by New York City in 1762.

International Women’s Day is a time to picture the progress, to call for change and to celebrate acts of courage by ordinary women who have played an extraordinary role in the history of their countries and communities.

WHAT IS THE SIGNIFICANCE OF INTERNATIONAL WOMEN’S DAY?

HOW TO CELEBRATE INTERNATIONAL WOMEN’S DAY?

The 2021 theme of International Women’s Day is ‘An equal world is an enabled world’. It focuses on gender equality and the empowerment of women in innovative ways. On this day, many schools set special lessons about the importance of women in society, their influence, and issues that affect them. The women teachers are honored within this way by the students and school itself. Many workplaces organize special celebrations about International Women’s Day through internal newsletters or notices, or gifts to the women employees.

If you want to think or remember about all the women in your life and present them your appreciation, mark this day in advance on your March 2022 calendar!

In conclusion, although March is the third month of the year, it can still be considered a “starting” month. A very bright idea may not have been implemented or your decision may not have been put into practice yet, but remember, you can adopt and implement them from now on, it is not late for anything! We also know that March is the first month of spring, even though we still feel the cold weather. In other words, the month of traveling, having fun and cheering started officially. With nature, our awakening begins. Therefore, it is the right time to have a good March 2022 calendar to keep yourself on track.  You cannot believe that an ordinary March 2022 calendar template will make you more motivated and readier to plan anything as you wish. Do not hurry up so much and do not waste your time at the same time, you can build this balance with the help of good assistance, of a blank March 2022 calendar! Do you draw on the Internet using Excel or Word?